CALVO’s Newest Track Is Definitely ‘Made For Us’

CALVO brings us his newest Future House track “Made For Us”, which features vocals from the lovely Gigi. CALVO, who hails from Hamburg, Germany, began gaining popularity in 2014 with a series of remixes and has grown to be quite the producer of house music.

This track slowly begins to show you what it’s all about, which is a rhythmic romp into the world of Future House. In the extended version (which I used for this review), Gigi’s beautiful vocals sneak in with “This song was made for us…”, which just adds to the anticipation that the first 30 seconds of the track brings. The rest of the first minute serves to prepare you for the rhythmic, classic sound of high synth and low piano. There is a reason these two instruments are used so often together in Future House. They just work.

I know it’s not just me when I say this. I really like the skipped beat drop. Or at least that’s what I’m going to call it. The times when the kick drum hits for a beat before the actual synths come in. It’s just like the heart shock to kick-start dancing. It works for me and I’ll bet it works for a lot of you out there too.

Gigi’s vocals really carry this track along. Her vocals keep the positivity of this song flowing. CALVO does a great job mixing her vocals in a way that make them almost better than an electronic instrument. These mixed sections “ah-eee-oh-oh-aye-aye” do an amazing job giving a speedy rhythm that keeps the track spinning.

Final Verdict: Made For Us is a great Future House track that would fit beautifully into any summertime mix. I don’t find way too much that is special about it (besides CALVO’s perfect mastering and mixing of Gigi’s vocals), so I wouldn’t say it’s ground-breaking. But rarely do I need something that is ground-breaking. No, this song does exactly what I’d want it to. Has my head bobbing and reminds me of the better things in life.

Check the extended version of the track out here: 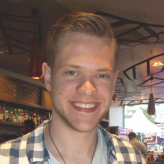 The resident American writer, editor, and EDM lover at Future’s Finest. Became friends with Rik and Coen while briefly living in the Netherlands in early 2015 as they were just dreaming of the empire known as Future’s Finest.